Speaking to reporters in Richmond, VA last night, Sen. John McCain (R-AZ) attacked “anyone” who points out that he is “fine” with keeping U.S. troops in Iraq for 100 or more years. “Anyone who worries about how long we’re in Iraq does not understand the military and does not understand war,” said McCain.

He then added that it is “really almost insulting to one’s intelligence” to question “how long we’re in Iraq” because he believes the current “strategy” is “succeeding.”

By dismissing as naïve those concerned with how long the U.S. military is mired in Iraq, McCain is claiming that top officials in the Pentagon don’t understand “the military” or “war” as well as he does. In a recent GOP presidential debate, McCain argued, “I’m the expert” on Iraq.

Top military brass, such as Chairman of the Joint Chiefs Adm. Mike Mullen and Army Chief of Staff Gen. George Casey, have worried in the past year that “a protracted deployment of U.S. troops”in Iraq would not be a wise move for the military:

By McCain’s logic, both the Army Chief of Staff and the Chairman of the Joint Chiefs of Staff don’t “understand the military” as well as he does.

With two thirds of the country thinking we should get out of Iraq sooner rather than later McCain should be so easy to beat in November. A seventy two year old mad man who sings "bomb bomb bomb bomb Iran." Does this sound like a winner? 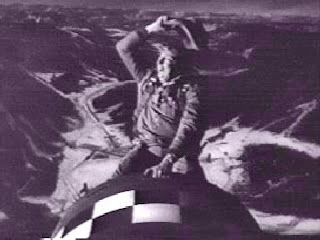 Is this really the person anybody wants as the next President?

McCain even goes so far as to directly compare his vision of Iraq to the current situation in Kuwait, where in exchange for basing rights and oil we help prop up an unaccountable and corrupt dictatorship. Fear that this is what we're aiming for in Iraq is precisely why many Iraqis are fighting so hard against our troops, and our habit of acting this way in other Gulf states is a major driving force of anti-American sentiment throughout the Muslim world. The Bush administration has at least had the good sense to pursue this agenda quietly and in secret, but hot-head McCain can't keep his mouth shut to avoid gaffes and can't stop digging now that he realizes he's in a hole.

McCain's own rhetoric could result in an increase in violence and further submarine his own chances.
Commentary By Ron Beasley --- 8:34 PM

Email ThisBlogThis!Share to TwitterShare to FacebookShare to Pinterest
Tags Bat Shit Crazy, John McCain
Newer Post Older Post Home
There are two novels that can change a bookish fourteen-year old’s life: The Lord of the Rings and Atlas Shrugged. One is a childish fantasy that often engenders a lifelong obsession with its unbelievable heroes, leading to an emotionally stunted, socially crippled adulthood, unable to deal with the real world. The other, of course, involves orcs.
~Kung Fu Monkey
--------------------