It's time to pull the plug

This is so moronic I wasn't even going to waste bandwidth discussing it.
Bush Regains His Footing
I was just going to chock this up to another example of how the DC punditry corps is just as brain dead as Terri Schiavo but Glenn Greenwald does such a great job of taking Broder down that it was just too good to pass up.

Beltway pundits have long been petrified of the reality that most Americans have turned against the President permanently and with deep conviction. Because the David Broders of the world propped up the Bush presidency for so long, they are deeply invested in finding a way to salvage it. They do this exactly the same way -- driven by the same motives and using the same methods -- that they refuse to accept the reality that the Iraq war which they cheered on and enabled is a profound failure, and are therefore intent on finding a way to salvage at least the apperance of success, if not the reality.

The DC punditry, including Broder, have spent six years building Bush up and when he goes down for good so will they. And yes, he has gone down for good.

The collapse of Bush's approval ratings is not some isolated or fleeting event that can be reversed with a few magic tricks from Karl Rove. Americans who once vigorously supported the President have simply abandoned him over time. Contrary to Broder's desire (masquerading as belief), the contempt with which Americans regard the Bush Presidency is not some recent, fleeting, reversible phenomenon. Instead, the Bush presidency has been steadily collapsing over the last two-and-a-half years: 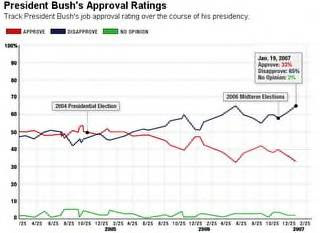 Simply put, as Americans have come to see what George Bush really is, they have inexorably turned against him. It is not some petty scandal or momentary intemperate outburst from the masses. The Bush presidency has collapsed because Americans, with emotional distance between themselves and 9/11, were emancipated from the fear-mongering which was the administration's sole weapon, and gradually realized the extreme corruption, dishonesty, and ineptitude which drives this presidency. And yet all along the way, the David Broders have repeatedly insisted that Bush was on the verge of some grand "comeback," as though eventually, the poor, confused Americans would come to their senses and realize what a decent and honorable man the President really is.

Sorry David, the Bush administration and you have dug a hole too deep to ever come back.

Yes, it's time to remove the feeding tube from Broder and the other DC pundits, they are obviously brain dead.

Update
Even Rick Moran on the right thinks this is nonsense.
Commentary By Ron Beasley --- 10:14 AM