OK, I'm just trying to get ahead of the spin, we all know it was Saddam's second cousin.
Cheney unhurt after deadly blast at Afghan base

BAGRAM, Afghanistan - A suicide bomber attacked the entrance to the main U.S. military base in Afghanistan Tuesday during a visit by Vice President Dick Cheney, killing up to 23 people and wounding 20. The Taliban claimed responsibility and said Cheney was the target.

Cheney’s spokeswoman said he was fine, and the vice president later met with President Hamid Karzai in the capital, Kabul, before leaving the country.

A red alert was sounded and Secret Service officials told Cheney there had been a suspected suicide attack. “They moved me for a relatively brief period of time to one of the bomb shelters nearby,” he said.

“As the situation settled down and they got a better sense in terms of what was going on, then I went back to my room until it was time to leave.”

It doesn't really matter if Cheney was the target or how far away he was from the blast. It just goes to show how the chaos in Afghanistan is increasing and that the US is helpless to stop it. 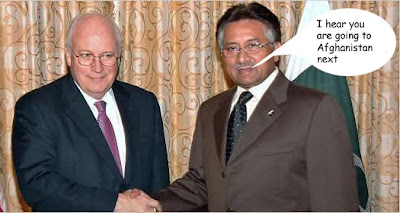 Steve Soto has an excellent post and analysis on all of this and asks, how did the Taliban know the super secret Cheney was there? Pakistan perhaps?

This is really Romper Room. The Taliban are supported by Pakistan’s ISI, where Cheney visited the day before. Why is no one asking how the Taliban knew where Cheney was? Sure, the Taliban would not be here to attack him if Cheney and Rumsfeld had finished Bin Laden off five years ago at Tora Bora. Nor would the Taliban be in this position had Bush and Cheney not encouraged Musharraf to give Bin Laden and the Taliban a free pass out of North Waziristan back in September. But the fact that this trip has turned into a joke of sophomoric secrecy and an attack against the Veep is a perfect illustration of the administration’s failed foreign policy and war on terror.