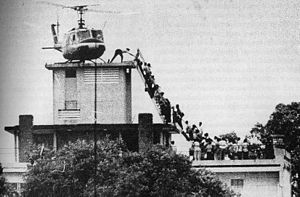 I graduated from high school in June of 1964.  The US had placed military advisors in Vietnam since the French left in 1954.  In August of 1964, a few weeks after my high school graduation, the North Vietnamese  allegedly fired on 2 US ships in the Gulf of Tonkin and congress passed the Gulf of Tonkin Resolution giving President Johnson unprecedented power to wage war.  The first action was the aerial bombing of military and industrial targets in North Vietnam.  It was anticipated that this action would bring the North to it's knees within 8 weeks.  That should remind you of "shock and awe" in Iraq.  Well it didn't work out that way.  The North Vietnamese and the Vietcong started attacking the US air bases in Vietnam.  In my freshman year in college the first US ground troops were sent to Vietnam to protect the air bases in March of 1965.

During my college career the war continued to escalate and a few months before my graduation in January of 1968 there was a coordinated attack by the North Vietnamese and the Vietcong - the Tet offensive.  As a result even more troops were sent and the draft boards were very busy.  Unlike the recent operations in the Middle East most Americans knew someone who served in Vietnam and many knew someone who died there.  When the war ended in 1973 over two and a half million had served there and 58,272 had died there.

The Vietnam war shaped my political thinking.  While over 58,000 of America's finest died for nothing I had hoped that we had learned a lesson.  But that was not to be the case.  The Bush/Cheney cabal and the military industrial complex made all the same wrong assumptions and there are still some who want to involve us in unwinnable military adventures.

I fear for the future.  The Middle East is a powder keg about to explode.  There are those who insist the US needs to show "leadership."  Leadership equals more of America's finest dying for nothing and resources needed to fix the homeland will be squandered elsewhere.

This is what I'm thinking on this Memorial Day.
Commentary By Ron Beasley --- 4:57 PM