Dinesh D'Souza can't keep it in his pants

The pseudo intellectual responsible for the anti Obama film 2016 has some problems with the flock: 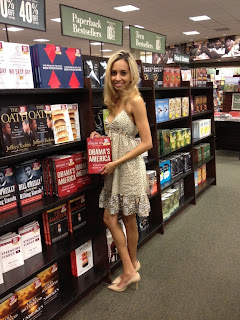 The above is a photo of the woman who the Evangelical magazine World reported today is allegedly at a center of a storm around the conservative pundit and president of The King's College, a Christian institution, Dinesh D'Souza.
Denise Odie Joseph II, who according to her Facebook page graduated high school in 2002, is pictured with a copy of D'Souza's book Obama's America. The photo comes from her blog, www.ideniselustafter.com, which has been taken down but can be accessed via a cached copy.
D'Souza, who is separated from his wife but, according to the World story not technically divorced, shared a hotel room with Joseph at a Christian authors conference in South Carolina. He reportedly told attendees that they were engaged.


The evangelical magazine WORLD is reporting that Dinesh D’Souza, whose book The Roots of Obama’s Rage was the basis for his anti-Obama movie 2016, showed up at a Christian conference last month with his fiancé. He shared a hotel room with the young woman, but, he assured a conference organizer in Clinton-esque fashion, “nothing happened.”

So you figure that conservative Christians might overlook an innocent, pre-marital shared hotel room, right? Perhaps. The real problem is that D’Souza is still married to his wife of 20 years.

According to WORLD’s Warren Smith, D’Souza, whose $10,000 per speech honoraria places him in the “top tier” of Christian speakers, was in South Carolina to speak at a Baptist church, which was hosting “high-profile Christians speak on defending the faith and applying a Christian worldview to their lives.” (Cue guffaws here.)
Smith describes one conference organizer, Alex McFarland, being “distressed” at the behavior of their celebrity speaker. According to Smith, D’Souza told McFarland that he had “recently” filed for divorce, although Smith found in court records that D'Souza filed for divorce about a week after the South Carolina conference took place.
D’Souza is also the president of The King’s College, and Smith reports that he's expected to be under scrutiny by the school’s board over this incident. (Smith’s boss, Marvin Olasky,resigned his post as TKC’s provost shortly after D’Souza was named president in 2010.) After TKC began looking into the matter, D’Souza texted Smith: “I have decided to suspend the engagement.”