Weekend Book Review - Ayn Rand and the World She Made

With the Ayn Rand cultist Paul Ryan becoming the Republican Vice Presidential Candidate today I thought this might be a good opportunity to republish my reveiw of the Ayn Rand Biography by  Anne C. Heller from 2010. 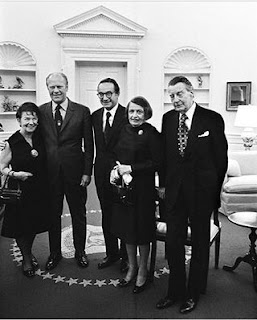 The picture on the left may represent the beginning of the deregulation frenzy that resulted in the current world wide economic disaster. It was taken in 1974 by David Hume Kennerly and pictured are President Gerald Ford, Alan Greenspan, Ayn Rand, Rand's husband Frank Conner and Greenspan's mother Rose Goldsmith. The occasion was Alan Greenspan being sworn in as chairman of the Council of Economic Advisers. The significance of the picture is that Ayn Rand is there next to her disciple Alan Greenspan but to understand the significance you must understand Rand herself and her philosophy. Anne C. Heller helps us do that with her excellent biography of Rand,Ayn Rand and the World She Made

I recommend this book not because I agree with anything Ayn Rand stands for but because it's a really good read and it's necessary to understand Rand and undererstand how we arrived where we are today. Heller makes it clear that Rand and her life are much more interesting than any of the creations in her fiction and there are times you forget that you are not reading fiction. I am going to concentrate on Rand's early life in this review - it's important because narcissists and sociopaths like Rand are either created early if not born that way.

When Rand was five or so, she recalled, her mother came into the children's playroom and found the floor littered with toys. She announced to Rand and Rand's two-and-a-half-year-old sister, Natasha, that they would have to choose some of their toys to put away and some to keep and play with now; in a year, she told them, they could trade the toys they had kept for those they had put away. Natasha held on to the toys she liked best, but Rand, imagining the pleasure she would get from having her favorite toys returned to her later, handed over her best-loved playthings, including a painted mechanical wind-up chicken she could describe vividly fifty years later. When the time came to make the swap and Rand asked for her toys back, her mother looked amused, Rand recalled. Anna explained that she had given everything to an orphanage, on the premise that if her daughters had really wanted their toys they wouldn't have relinquished them in the first place. This may have been Rand's first encounter with injustice masquerading as what she would later acidly call "altruism." Her understanding of how power can be acquired by a pretense of loving kindness would grow only more acute with time.
Perhaps it's little wonder, then, that from the age of four or five onward, Rand developed a keen sense that anything she liked had to be hers, not her mothers, the family's, or society's, an attitude that readers of her 1943 novel The Fountainhead will recognize in the perverse and complicated character of Dominique Francon. As a corollary, she claimed not to care about being approved of or accepted by her family and peers. Since she generally wasn't accepted, the proud, intelligent child appears to have learned early to make a virtue of necessity. In her twenties and thirties, she would construct a universe of moral principles built largely on the scaffolding of some of these defensive childhood virtues.


The second influence in Rand's life came when she read a serial in a French Boys magazine, The Mysterious Valley. It was there that Rand met Cyrus Vance, a handsome and heroic figure and in Rand's eyes a hero in every way. Rand would spend the rest of her life looking for a Cyrus Vance and creating him in her fiction.

Rand herself was an elitist who lived on cigarettes, amphetamines and chocolate. Elitism was also what she was marketing in her novels. Her characters like Galt and Roark were unbelievable because they were little more than abstract principles personified. Her vision of capitalism was simple and had a grade school like quality to it.

But Rand has impacted us all and still does. The principal architect of our current economic crisis, Alan Greenspan was a disciple for most of his life but after looking at the havoc he had created had to recant. (Via Digby)


"I have found a flaw" in free market theory, Greenspan said under intense questioning by Representative Henry Waxman, the Democratic chairman of the Government Oversight Committee of the House of Representatives. "I don't know how significant or permanent it is," Greenspan added. "But I have been very distressed by that fact."

Pressed by Waxman, Greenspan conceded a more serious flaw in his own philosophy that unfettered free markets sit at the root of a superior economy.

"I made a mistake in presuming that the self-interests of organizations, specifically banks and others, were such as that they were best capable of protecting their own shareholders and their equity in the firms," Greenspan said.

Waxman pushed the former Fed chief, who left office in 2006, to clarify his explanation.

"In other words, you found that your view of the world, your ideology, was not right, it was not working," Waxman said.

"Absolutely, precisely," Greenspan replied. "You know, that's precisely the reason I was shocked, because I have been going for 40 years or more with very considerable evidence that it was working exceptionally well."


But she still has her followers in important places today like the Republican's wonder boy, Congressman Paul Ryan.

It's important to know what motivates the enemy and the Rand cultists are still with us.  As Digby notes Rand's followers are passing out free books.  For that reason this is an important read for anyone concerned about how Ayn Rand is still an influence.

I received a copy of this book from the publisher for this review.