In 2008 the United States elected a black President - the result was a very negative reaction by about 25% of the population. It's not the first time there was a reaction to shifts in racial equality. In his concession speech in 2008 John McCain mentioned T.R, Roosevelt's dinner with Booker T. Washington in 1901. Like most of us this was the first time author Deborah Davis had heard of this historical event. She became curious and researched the history of the event and wrote Guest of Honor: Booker T. Washington, Theodore Roosevelt, and the White House Dinner That Shocked a Nation.

The first half of the book is a mini biography of both T.R Roosevelt and Booker T. Washington. For me this was very informative since I had little knowledge of this period of US history. TR was born into wealth and privilege and Booker T. was born a slave but their lives had many parallels. They first met in 1898 when they discussed the performance of the black soldiers that were part of TR's Rough Riders.

While Booker T. continued to build Tuskegee TR used the popularity of the Rough Riders to become governor of New York. Being TR he manged to upset the New York Republican political machine. The machine convinced McKinley to choose TR as his Vice President just so they could get him out of the State House. TR continued his communication with Booker T and agreed to visit Tuskegee. Fate had other ideas and when McKinley was assassinated TR suddenly found himself President and Booker T suddenly found himself an adviser to the President of the United States.

On October 16, 1901 TR had a evening meeting with Booker T. In addition TR had a big family meal planned that included a hunting friend from Colorado. He made the decision to invite Booker T to dinner. Both men recognized the danger - TR almost withdrew the invitation and Booker T almost turned it down. But the dinner happened and the next morning it was reported in the press.

A summary of TR's daily agenda was read by a reporter at the Washington Post and suddenly realized that a black man had dined with the President at the White House.


"Booker T. Washington of Tuskegee, Ala., dined with the president last evening." he wrote in his column. That one line caused the telegraphs to start clicking furiously in the capital, their shocking message reverberating across the nation like a thunderclap.

In the South the reaction was immediate and angry. TR was blasted for the invitation and the "uppity" Booker T for accepting. The loss of slavery was bad enough for the South but the idea that "coons" were social equals was just too much. The press in the North was for the most part positive. 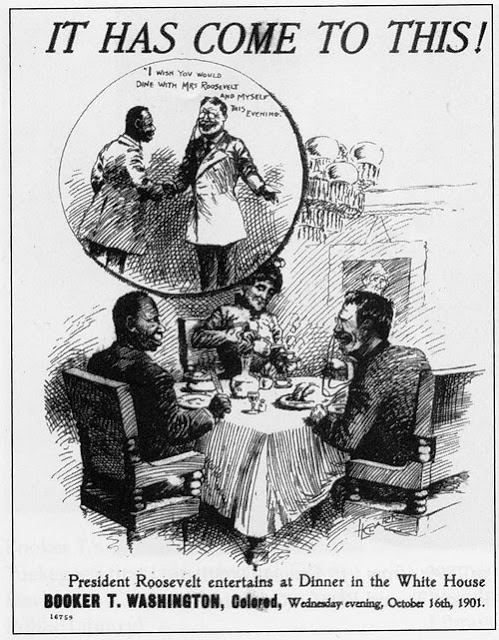 Although both men were able to accomplish a great deal that dinner haunted them for the rest of their lives.

This is a very readable book covering the history of the US 30+ years after the civil war. It is valuable because it gives us not only a picture of how things have changed in the century since TR was President but also how much really hasn't changed.  I recommend this book to anyone interested in this short period of history.

Cross Posted At The Moderate Voice

I received a review copy of this book from the publisher.