Race, Politics and the Media 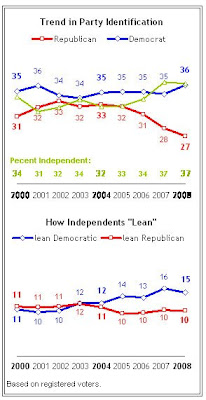 As we can see according to the latest from the Pew Research Center There are fewer Republicans and Republican leaning Independents than at any time since 2000.

The balance of party identification in the American electorate now favors the Democratic Party by a decidedly larger margin than in either of the two previous presidential election cycles.

In 5,566 interviews with registered voters conducted by the Pew Research Center for the People & the Press during the first two months of 2008, 36% identify themselves as Democrats, and just 27% as Republicans.

The share of voters who call themselves Republicans has declined by six points since 2004, and represents, on an annualized basis, the lowest percentage of self-identified Republican voters in 16 years of polling by the Center.

The Democratic Party has also built a substantial edge among independent voters. Of the 37% who claim no party identification, 15% lean Democratic, 10% lean Republican, and 12% have no leaning either way.

By comparison, in 2004 about equal numbers of independents leaned toward both parties. When "leaners" are combined with partisans, however, the Democratic Party now holds a 14-point advantage among voters nationwide (51% Dem/lean-Dem to 37% Rep/lean-Rep), up from a three-point advantage four years ago. 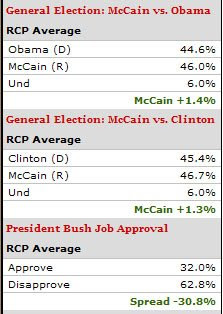 So how can we explain the fact that John McCain is in a virtual tie with both Democratic candidates in spite of the fact he is little more than a clone of a president with a 32 percent approval rating? The economy is most voters primary concern and McCain has admitted he knows little about economics and in fact about the only thing he has said is that the Bush tax cuts should be continued. While approval of the Iraq war is up a little a majority still want the US out - McCain wants to be there for a hundred years. A majority of voters oppose military action against Iran - McCain wants to "bomb - bomb - bomb Iran". So how can he be doing so well? Is it because of race and gender? The gender issue is complicated because we are dealing with Hillary Clinton who has baggage that is not entirely gender related. The race issue is clearer. Obama has been unable to get a majority of white male voters in any primary, a sure sign that race is still an issue. John Cole pointed out that there is no way Obama could carry his state of West Virginia.

Posting at Firedoglake David Neiwert wonders how much of the race issue is a creation of the media.

Is the media dumping gasoline on the race fire? David thinks the answer is yes.
Commentary By Ron Beasley --- 6:31 AM

Email ThisBlogThis!Share to TwitterShare to FacebookShare to Pinterest
Tags 2008, Barack Obama, Hillary Clinton, MSM, Race
Newer Post Older Post Home
There are two novels that can change a bookish fourteen-year old’s life: The Lord of the Rings and Atlas Shrugged. One is a childish fantasy that often engenders a lifelong obsession with its unbelievable heroes, leading to an emotionally stunted, socially crippled adulthood, unable to deal with the real world. The other, of course, involves orcs.
~Kung Fu Monkey
--------------------