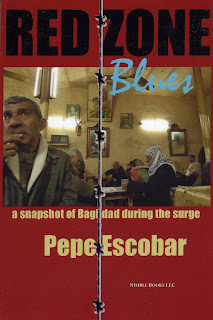 A few weeks ago I read Pepe Escobar's
Red Zone Blues:
a snapshot of Baghdad during the surge
Escobar returned to Iraq to see for himself what Iraq was like during the surge. In my review of the book I wrote the following:

Escobar starts his trip in Damascus, Syria the home of thousands of Iraqi refugees.

This is a biblical exodus—the YouTube version. Welcome to Little Fallujah—previously Geramana, southeast Damascus. The Nahda area of Geramana now boasts at least 200,000 resident Iraqis. They visibly came with all their savings—and made good use of it. The congested main drag of al-Nahda is an intoxicating apotheosis of anarchic capitalism, business piled upon business—Hawaii fruits, Galilia underwear, Call Me mobile, Snack Bambino, Discovery software school, Eva sunglasses, boutique Tout le Mond, all Iraqi owned.

Yes, many of the people who should be building Iraq are no longer there-driven out by ethnic cleansing and violence.

One of those who was driven out is a blogger that many of us has followed since the invasion and occupation, River at Baghdad Burning who has supplied her first post since leaving Baghdad for Damascus.

Syria is a beautiful country- at least I think it is. I say “I think” because while I perceive it to be beautiful, I sometimes wonder if I mistake safety, security and normalcy for ‘beauty’. In so many ways, Damascus is like Baghdad before the war- bustling streets, occasional traffic jams, markets seemingly always full of shoppers… And in so many ways it’s different. The buildings are higher, the streets are generally narrower and there’s a mountain, Qasiyoun, that looms in the distance.

It is estimated that there are at least 1.5 million Iraqis in Syria today. I believe it. Walking down the streets of Damascus, you can hear the Iraqi accent everywhere. There are areas like Geramana and Qudsiya that are packed full of Iraqi refugees. Syrians are few and far between in these areas. Even the public schools in the areas are full of Iraqi children. A cousin of mine is now attending a school in Qudsiya and his class is composed of 26 Iraqi children, and 5 Syrian children. It’s beyond belief sometimes. Most of the families have nothing to live on beyond their savings which are quickly being depleted with rent and the costs of living.


Within a month of our being here, we began hearing talk about Syria requiring visas from Iraqis, like most other countries. Apparently, our esteemed puppets in power met with Syrian and Jordanian authorities and decided they wanted to take away the last two safe havens remaining for Iraqis- Damascus and Amman. The talk began in late August and was only talk until recently- early October. Iraqis entering Syria now need a visa from the Syrian consulate or embassy in the country they are currently in. In the case of Iraqis still in Iraq, it is said that an approval from the Ministry of Interior is also required (which kind of makes it difficult for people running away from militias OF the Ministry of Interior…). Today, there’s talk of a possible fifty dollar visa at the border.

She describes the return to the Iraqi/Syrian border for new Visas and concludes with this.

By the time we had reentered the Syrian border and were headed back to the cab ready to take us into Kameshli, I had resigned myself to the fact that we were refugees. I read about refugees on the Internet daily… in the newspapers… hear about them on TV. I hear about the estimated 1.5 million plus Iraqi refugees in Syria and shake my head, never really considering myself or my family as one of them. After all, refugees are people who sleep in tents and have no potable water or plumbing, right? Refugees carry their belongings in bags instead of suitcases and they don’t have cell phones or Internet access, right? Grasping my passport in my hand like my life depended on it, with two extra months in Syria stamped inside, it hit me how wrong I was. We were all refugees. I was suddenly a number. No matter how wealthy or educated or comfortable, a refugee is a refugee. A refugee is someone who isn’t really welcome in any country- including their own... especially their own.

We live in an apartment building where two other Iraqis are renting. The people in the floor above us are a Christian family from northern Iraq who got chased out of their village by Peshmerga and the family on our floor is a Kurdish family who lost their home in Baghdad to militias and were waiting for immigration to Sweden or Switzerland or some such European refugee haven.

The first evening we arrived, exhausted, dragging suitcases behind us, morale a little bit bruised, the Kurdish family sent over their representative – a 9 year old boy missing two front teeth, holding a lopsided cake, “We’re Abu Mohammed’s house- across from you- mama says if you need anything, just ask- this is our number. Abu Dalia’s family live upstairs, this is their number. We’re all Iraqi too... Welcome to the building.”

I cried that night because for the first time in a long time, so far away from home, I felt the unity that had been stolen from us in 2003.

This is what George W. Bush's war for greed and oil has done. Is it any wonder that 75% of the Iraqis think it's OK to kill Americans?
Commentary By Ron Beasley --- 2:05 PM