Everything continues to be Rosy in Iraq - unless of course you shake hands with George W. Bush. 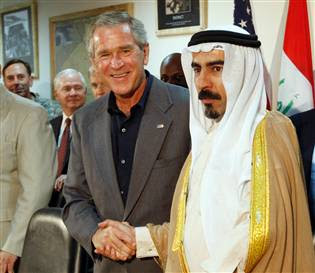 Abu Risha was a leading member of the Anbar Salvation Council, a group formed a year ago Thursday that proved critical to a recent reduction in insurgent violence in the province. He worked closely with U.S. officials, a fact that made him a target of militants angry about his decision to cooperate with the United States and his ability to convince other tribal sheiks to follow.

Anbar province is considered the big "surge" success story in spite of the fact that the changes in Anbar were underway before the surge.

And so much for reconciliation:
Compromise on Oil Law in Iraq Seems to Be Collapsing

BAGHDAD, Sept. 12 — A carefully constructed compromise on a draft law governing Iraq’s rich oil fields, agreed to in February after months of arduous talks among Iraqi political groups, appears to have collapsed. The apparent breakdown comes just as Congress and the White House are struggling to find evidence that there is progress toward reconciliation and a functioning government here.

Senior Iraqi negotiators met in Baghdad on Wednesday in an attempt to salvage the original compromise, two participants said. But the meeting came against the backdrop of a public series of increasingly strident disagreements over the draft law that had broken out in recent days between Hussain al-Shahristani, the Iraqi oil minister, and officials of the provincial government in the Kurdish north, where some of the nation’s largest fields are located.

Email ThisBlogThis!Share to TwitterShare to FacebookShare to Pinterest
Tags Iraq