We have seen Alberto Gonzales delegate everything so he has to take responsibility for nothing. The Gonzo school of management has now gone to war. 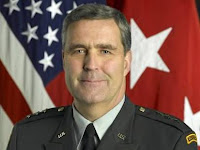 After a frustrating search for a new "war czar" to oversee the wars in Iraq and Afghanistan, ABC News has learned that President Bush has chosen the Pentagon's director of operations, Lt. Gen. Douglas Lute, for the role.

In the newly created position of assistant to the president and deputy national security adviser for Iraq and Afghanistan policy and implementation, Lute would have the power to direct the Pentagon, State Department and other agencies involved in the two conflicts.

Lute would report directly to the president and to National Security Adviser Stephen Hadley.

Well it looks like he has broad shoulders - he will need them. We are talking about one good soldier here, willing to throw himself on the hand grenade that is George W. Bush's debacle in Mesopotamia. Or he may just be a dumb shit.
Update
Steve Soto has an interesting post on what all this might mean.
Commentary By Ron Beasley --- 2:41 PM