The Conscience and Soul of the godless 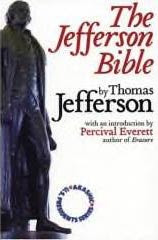 To make it clear up front I am one of those godless atheist lefties the right so much likes to rant about. I grew up in the church but at some point I found that there was as much in the Bible that I considered immoral and left the church. As I went through college and studied physics, chemistry, biology and geology I came to the conclusion that a god was simply not necessary. With that, after dropping him from my blogroll a couple of days ago I'm going to link to this post by Atrios:
Conscience and Soul
He discusses how the "religious left" seems to think only they have the moral authority to shape the conscience and soul of the Democratic Party.

So, "the religious community can be the conscience and the soul of the Democratic party." Presumably, and if I'm misunderstanding correct me, she's suggesting that basic moral grounding must come from the religious community. Now, this is part and parcel with the basic messages people like me get regularly from people all over the spectrum, that atheists and agnostics lack a conscience and a sense of values, and these things only come from religion and the religious.

I'd never write that "the atheist community can be the conscience and the soul of the Democratic party," though I imagine if I did Bill Donohue would send out a press release. It'd be a highly exclusionary statement, and it would suggest an inherent moral superiority of the godless over the faithful.

Now there is a lot of profound morality in the Bible. Thomas Jefferson isolated that when he removed the old testament and the magic from the Christian Bible and left only the philosophy and teachings of Jesus in what has become to be known as the Jefferson Bible. I object to the idea that only the "religious" can determine morality - it doesn't matter if it's left or right. Religion in politics is by it's very nature dangerous and un-Democratic because the religious always feel they have the one true path. A Democratic Party overly influenced by the "religious left" will end up being the same as a Republican Party controlled by the religious right.
Commentary By Ron Beasley --- 8:40 AM