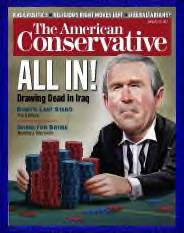 This magazine from The American Conservative sums up George W. Bush and Iraq. He bet his presidency on a successful invasion and occupation of Iraq and lost. Now he's betting our sons, daughters, husbands and wives on one last bet. Andrew J. Bacevich explains in Going for Broke.

In this regard, the Baker-Hamilton report, issued as signs of impending failure in Iraq were becoming incontrovertible, was intended to do two things. Most obviously, it offered George W. Bush political cover to begin extricating the United States from Iraq. Yet that offer came at a price: by endorsing the ISG package of 79 recommendations—Baker pointedly warned against treating them as a “fruit salad”—the president would effectively repudiate his entire post-9/11 approach to foreign policy. To embrace the ISG’s findings meant renouncing unilateralism, engaging adversaries rather than castigating them as “evil,” and valuing stability over the promulgation of any Freedom Agenda. In effect, it meant steering the United States back toward the course that Secretary of State Baker had charted when working for Daddy Bush. After a lost weekend spent binging on the intoxicating liquor of Wilsonianism, the president would return to the path of sobriety.

Neoconservatives instantly grasped the nature of the threat: the issue at hand was not simply Iraq. Neocons have long loathed Baker as an unprincipled wheeler-dealer (and barely closeted anti-Semite). Now here was their nemesis leading the Old Guard in an assault on their most cherished convictions. If Bush took the bait—if he chose to cut his losses in Iraq—the effect would be to discredit their entire approach to foreign policy. Neoconservative hopes of “transforming” the Islamic world, banishing tyranny from the face of the earth, and securing permanent global dominion based on unquestioned military supremacy all would be dashed.

The only thing the Iraq war has accomplished is to discredit the delusional ideology of the neocons. But as we have seen in the past the neocons don't give up and went into the attack mode.

So neoconservatives launched a fierce—at times hysterical—counterattack. Among their several complaints, one in particular stood out: Baker and Hamilton based their conclusions on the assumption that victory in Iraq lay beyond reach. Neocon critics portrayed this as the ultimate heresy. Any admission of failure in Iraq was premature, they insisted. The war there had to be won, and it could be won.

A lesser light in the neoconservative constellation, Kagan had for months been flogging his own scheme for turning the tide in Iraq. From his perch at 17th and M Street, it all appeared quite simple: rather than looking for ways to turn the war over to the Iraqis, it was time for American commanders to get serious about winning. They needed to quash the insurgency and secure the population, thereby creating conditions for economic reconstruction and political “reconciliation.” Above all, winning meant sending more G.I.’s to Iraq and especially into Baghdad, which Kagan identified as the decisive battlefield.

Here was the neoconservative response to James Baker: the imperative of the moment was not to withdraw but to surge.

In the end even Kagan's delusional plan was watered down.

Only when it came to the dimensions of the surge did Kagan’s assurance slip. In early December 2006, he was insisting that 80,000 reinforcements were needed. As he refined his plan, that number shrunk. By year’s end he concluded that a mere 30,000 additional troops would suffice. Did this adjustment reflect Kagan’s perception that the task was becoming easier? Were conditions in Iraq somehow improving? Or was Kagan tacitly acknowledging that the Pentagon did not after all have “many more troops to send”? He offered no explanation.

What can we say of this proposal? Simply this: to imagine that 170,000 troops will accomplish what 140,000 troops failed to do in nearly four years or that marching a handful of additional combat brigades into the maw of Baghdad will snatch victory from the jaws of defeat qualifies as pure fantasy. Kagan’s “surge” is the first cousin to Kenneth Adelman’s more famous “cakewalk.” It is ideology dressed up as strategy. Marketed as the product of careful analysis, the surge should be seen for what it is: a naked gamble. Tacitly acknowledging the point, some proponents even refer to it as the “double down” option.

The Iraq Study Group
Bacevich goes on to explain that the Baker commission offered a way to get out of the mess before it became obvious how we got into it. In other words James Baker was not so much trying to provide cover for George W. Bush but for Ronald Reagan, and George HW Bush and even FDR and JFK.

This convenient amnesia allowed the ISG to overlook a record of bipartisan bungling and shortsightedness extending over a period of decades. Franklin D. Roosevelt got the ball rolling in 1945, promising protection to the House of Saud in exchange for preferred access to Saudi oil. Dwight D. Eisenhower made his own distinctive contribution, engineering a coup in Tehran and forging a fateful partnership with the Shah. John F. Kennedy chipped in with another CIA-assisted coup, this one bringing the Ba’ath Party to power in Baghdad. Lyndon Johnson and Richard Nixon affirmed the Iranian connection and added another, establishing a costly “special relationship” with Israel. When revolutionaries tossed the Shah out on his ear, Jimmy Carter upped the ante: under the terms of the Carter Doctrine, the United States vowed henceforth to use any means necessary to secure its interests in the Gulf.

Celebrated by neoconservatives as a man of vision and principle, Ronald Reagan manifested neither of these qualities when it came to the Middle East. In Lebanon, he flung away the lives of 241 U.S. troops to no purpose except perhaps to raise questions about American will. After establishing a tacit anti-Iranian alliance with Iraqi dictator Saddam Hussein, Reagan okayed a hare-brained scheme to funnel U.S. weapons to Tehran. Iran-Contra became Reagan’s trifecta: a policy that was simultaneously stupid, illegal, and an embarrassing failure. Meanwhile, just off-stage in the Petri dish of Soviet-occupied Afghanistan, Reagan’s policies inadvertently served to cultivate the bacillus of Islamic radicalism.

Reagan’s successor, George H.W. Bush, assisted by then Secretary of State James Baker, took the final plunge. With his invasion of Kuwait in 1990, Saddam Hussein outlived his usefulness to the United States. Operation Desert Storm, Bush’s attempt to remove the Iraqi dictator from the scene, came up short. Not for the last time an ostensibly historic victory over Iraq left in its wake a problematic legacy. Policing the Gulf now became a full-time job. To keep Saddam in his box and the mullahs at bay, Bush scattered a network of quasi-permanent military garrisons across the region. Bill Clinton inherited this mare’s nest and then proceeded to fritter away eight years bombing Iraq to little effect and absorbing terrorist attacks on American forces and installations.

Yes it was a truly bipartisan effort and was all about the control of oil.

By the time George W. Bush became president, Republicans and Democrats alike subscribed to a common set of dubious assumptions: that the Persian Gulf represents a vital strategic interest, permanent and inescapable; that Gulf nations are incapable of managing their own affairs; that the United States, therefore, has no alternative but to determine the fate of this region; that American power and prestige, guided by distinguished statesmen in the mold of James Baker and Lee Hamilton, will suffice to do just that; that peace and prosperity for all lie just around the corner, if only Americans will persist a bit longer.

Here lies the ultimate purpose of the Iraq Study Group: to shield these assumptions from critical scrutiny. Perpetuating the Great Game of the modern Middle East ensures that the flow of oil, arms, and contracts continues without interruption. As long as the Game goes on, it provides a rationale for the endless comings-and-goings of important personages engaged in “the search for peace.” Think tanks churn out policy papers by the score. Lobbying firms prosper. Guests on Sunday morning talk shows prattle on about the latest crisis. Recruited to serve on blue-ribbon commissions, high governmental officials from yesteryear relive their glory days. The Game is its own reward. For members of the Washington Party, its preservation qualifies as a categorical imperative.

When it comes to U.S. policy in the Middle East, neither the cavalier urgings of Frederick Kagan nor the confident reassurances of James Baker will provide the basis for defining a “way forward.” Despite superficial differences, their prescriptions point in the same direction: they will simply exacerbate our predicament. Further militarizing U.S. policy, always the first choice of neoconservatives, will only compound our dilemma; yet so too will deference to self-appointed Wise Men, who created that dilemma in the first place.

Neoconservatives like Kagan believe that the United States is called upon to remake the Middle East, bringing the light of freedom to a dark quarter of the world. Pseudo-realists like Baker believe that the United States can manipulate events in the Middle East, persuading others to do our bidding. Both views, rooted in the conviction that Providence has endowed America with a unique capacity to manage history, are pernicious.

The way forward requires abandoning that conviction in favor of a fundamentally different course. A sound Middle East strategy will restore American freedom of action by ending our dependence on Persian Gulf oil. It will husband our power by using American soldiers to defend America rather than searching abroad for dragons to destroy. A sound strategy will tend first to the cultivation of our own garden.

A real course change will require a different compass, different navigational charts, and perhaps above all different helmsmen, admitting into the debate those who earn their livelihoods far from the imperial city on the Potomac. A foreign policy worthy of the name will reflect the concerns and aspirations of ordinary Americans. It’s that last prospect that Frederick Kagan and James Baker most fear.