Rick Santorum has equated the war in Iraq with J.R.R. Tolkien's "Lord of the Rings.

According to the paper, Santorum said that the United States has avoided terrorist attacks at home over the past five years because the "Eye of Mordor" has been focused on Iraq instead.

"As the hobbits are going up Mount Doom, the Eye of Mordor is being drawn somewhere else," Santorum said. "It's being drawn to Iraq and it's not being drawn to the U.S. You know what? I want to keep it on Iraq. I don't want the Eye to come back here to the United States." 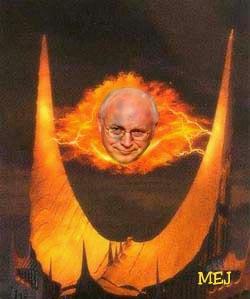 Of course Rick Santorum is right, we are in a monumental battle with the forces of evil but his geography is a little off. Who should no better than the Hobbits here at MEJ. Mount Doom and the evil eye are located in whatever undisclosed bunker Dick Cheney happens to be residing in at any given moment. Today while being interviewed by chief radio Orc, Rush Limbaugh, he proved once again that he's not only evil but bat shit crazy. Via Think Progress.

CHENEY: Well, I think there’s some natural level of concern out there because in fact, you know, it wasn’t over instantaneously. It’s been a little over three years now since we went into Iraq, so I don’t think it’s surprising that people are concerned.

On the other hand, this government has only been in office about five months, five or six months now. They’re off to a good start. It is difficult, no question about it, but we’ve now got over 300,000 Iraqis trained and equipped as part of their security forces. They’ve had three national elections with higher turnout than we have here in the United States. If you look at the general overall situation, they’re doing remarkably well.

This on the day we find out that the Iraqis can't "stand up" so we can "stand down".

BAGHDAD, Iraq - U.S. forces were back patrolling the streets of the predominantly Shiite town of Balad on Tuesday after a shocking five days of sectarian violence in which nearly 100 died. Iraq's 4th Army, rated one of the nation's best trained, had been unable to stem sectarian violence since taking full control of Salahuddin province a month ago.

And that Sunni insurgent groups have formed their own separate Sunni state within Iraq. And of course the violence continues to escalate and both Iraqis and Americans continue to die.
Commentary By Ron Beasley --- 6:17 PM